Rules of the Campfire

Stories in Glass: Book One

If you woke up one day and realized you had memories from more than seventy lives, fluid in every language you’d ever spoken, and recalled all the texts you’d ever read, would you wonder why?

It took Asitr forty years to discover the why. Soon after, he appears as a guest on a radio talk show to bait traps with the telling of stories. He tells tales about his life as one of the world’s most popular and quickly forgotten celebrities — of gardening for the Prophet Enoch, eavesdropping on Satan and Baal Zebub, and living between lives in a lost world. They sounded like the tall tales of a crazy man.

Twenty years later, a John Doe is found, naked and shivering, on the grounds of the Harbinger Psychiatric Institute, clutching a six-inch orb of blue glass and anxious to tell his own story. Is it a tale of organized insanity inspired by Asitr’s radio appearance?

Dr. Henry Milton has what looks like an easy assignment: he has twenty-four hours to evaluate the John Doe and refer him for processing. But John Doe has a timetable of his own. He has less than forty-eight hours to convince Dr. Milton to suspend his disbelief in a supernatural world where activities swirl around us unseen and mingle within our own natural realm.

Installation instructions for MOBI and EPUB formats are available here. 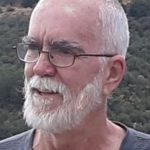 Paul S. Moore was born in the Missouri Ozarks, raised in St. Louis, and eventually settled in the sand of central Florida. He calls each of these places home.

His inner mix of hillbilly river rat, lowlands daydreamer, sand road hermit, and reader of nineteenth-century history writers form the base of a non-elite education. These roots allow imagination to turn historic events into serendipitous thoughts. Those thoughts organize into stories, and stories become novels.

With the remedial help of a good critique group, and the birth of publishing companies that read a manuscript without asking first, "What are your credentials?", he's found a voice to share those stories.