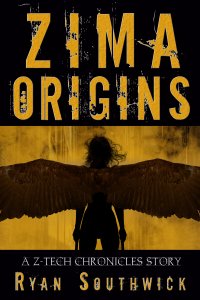 Free at last of the programming that drove her to kill, the formerly enslaved artificial intelligence known as Zima now has her own android body, and is determined to find her place in the world … and to gain the family she never had.

But the transition from a regime-ending killing machine to stand-up citizen is more difficult than Zima anticipated. Years of brainwashing have left her with a litany of unpredictable, lethal reactions, which force even her liberators from Z-Tech to cast her out for fear of their own safety.

Alone in San Francisco’s Mission District, Zima faces society for the first time — not as a computer inside a cyborg, whose human host managed her day-to-day interactions, but as herself. Emotions, sarcasm — even things as simple as lies — become imposing hurdles in her efforts to integrate.

But she’s nothing if not persistent. After days of searching, she meets a teenage boy and his little sister — each with needs Zima might be able to fill.

Rosa wants a big sister. Emilio is over his head as a mule for a local gang. A blonde, indestructible assassin in search of a home may be just what they need … if Zima’s homicidal tendencies don’t kill them first.

A free short story by our own Lisa Jacob (@darkmysticquill)!

In prison, the old teach the young … and sometimes the other way around.

"The Joint (A Grimaulkin Story)" by L. A. Jacob, author of the "Grimaulkin" and "War Mage" series - https://paperangelpress.com/joint/

why writers look confused
- wrote a poignant line and surprised self
- took a break from writing and immediately forgot how to write
- reader really loved your book??
- reader really hated it??!!
- also, let's be real, confusion is just our face
- we have no idea what's going on