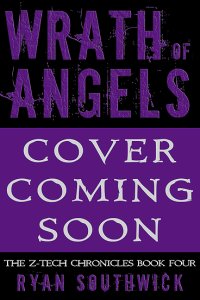 The Resistance must risk everything and face the most powerful military organization in the world to save the very people who vilify them: humanity itself.

Cappa’s loss has affected everyone, though none more than Charlie Z, whose grief is all-consuming. Still, Anne Perrin, Zima, Tabby, Mark, Dela, and the rest of the Resistance carry on, trying to figure out their place in a world inexorably heading for nuclear war.

The mysterious Entity is locked in the farthest corner of their underground headquarters. As the new leader of the Resistance, Anne must decide whether it’s friend or foe, but the clock is ticking. Zima’s creator, Alvin Orwing, suffered a crippling loss at the spaceship’s destruction, and he’ll stop at nothing to reclaim what’s his — even if that means an unholy alliance with the alien.

Orwing launches a devastating assault leaves the Resistance in mourning, and the key to the aliens’ plans in Alvin’s hands.

With their own country against them, Anne and the rest of the former Z-Tech crew must figure out a way to assault an impregnable base on the other side of the world before Orwing finishes what the
Entity began: humanity’s utter destruction.