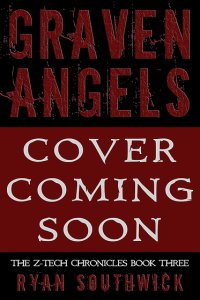 The most powerful vampire in the world could be the key to humanity’s salvation … or the instrument of final destruction.

Anne Perrin and the rest of her Z-Tech family have built a new life in Montana, marred only by the presence of the malevolent Entity in her mind. Its apocalyptic plans are kept in check only by the computer implant created by Charlie Z, former President of Z-Tech Industries, which allows her to maintain her free will. Anne has intentionally removed herself from the global vampire fight to prevent the Entity from learning too much and, in the process, has obtained the life she’s always wanted.

But trouble won’t leave her in peace.

The Entity’s vision of the world doesn’t include humans. With the vampire epidemic running unchecked, the Entity now has what it needs to wipe mankind from the map — and it wants to use Anne as its instrument of annihilation.

When an old acquaintance shows up unexpectedly at Anne’s door, her new life is turned upside down by a world-ending chain of events that even Charlie and the rest of Anne’s extraordinary family may be powerless to stop.

Today is the last day to get the digital editions of the first two books from Stories in Glass, "Rules of the Campfire" and "Songs in a Box", for only 99¢!